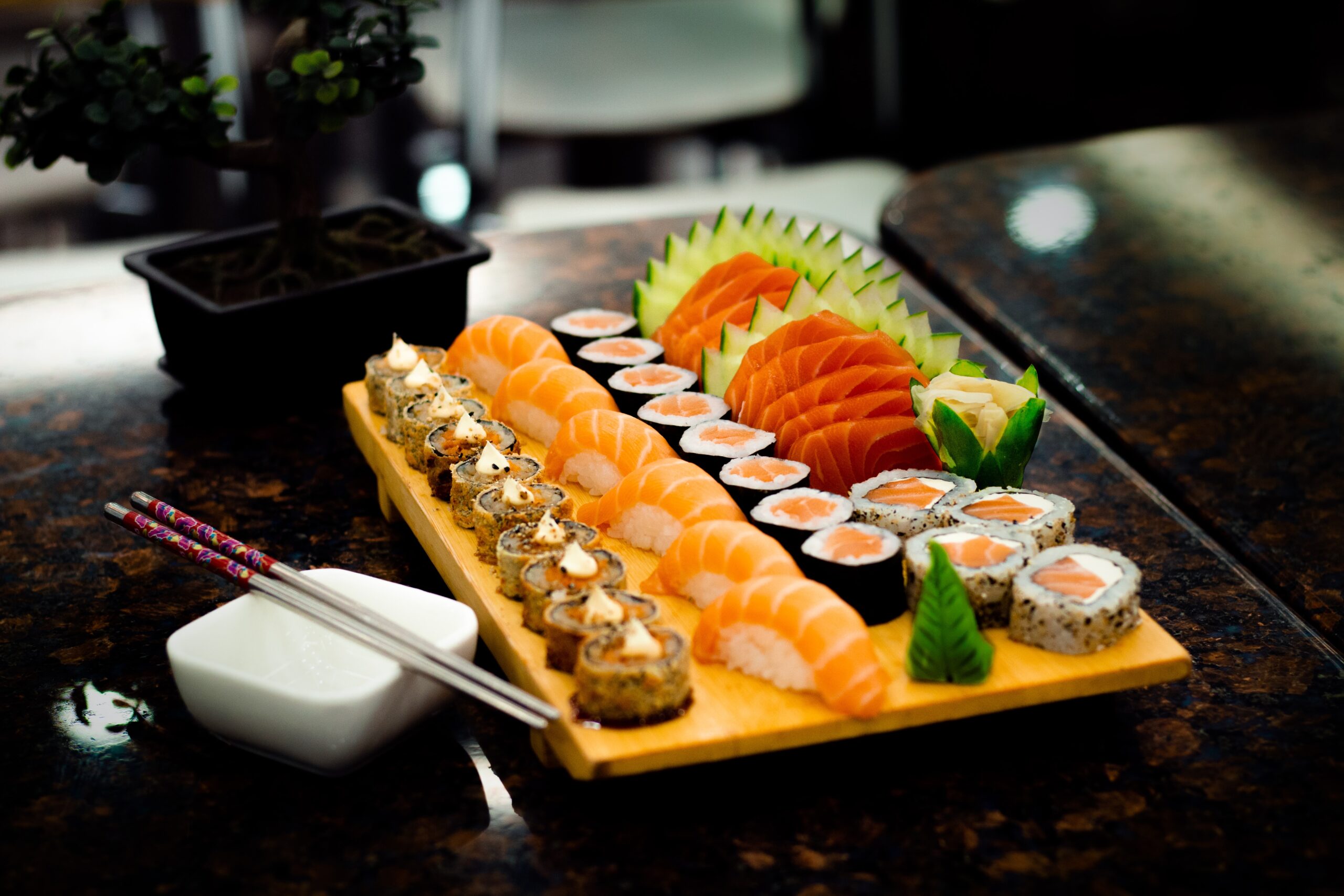 Sushi is a dish that is extremely popular in Japan and is known as the “Japanese sole food”. Not only that Sushi goes around on the conveyor belt, but also around the world in different forms. Let’s take a look at some of the reasons why this has happened.

The first thing that comes to mind when you think of “sushi” is probably Nigiri Sushi. Sushi has developed through the history and ingenuity of Japanese rice eaters and fish preservation, but there are actually many different types of sushi. Here are some of the most common types of sushi. 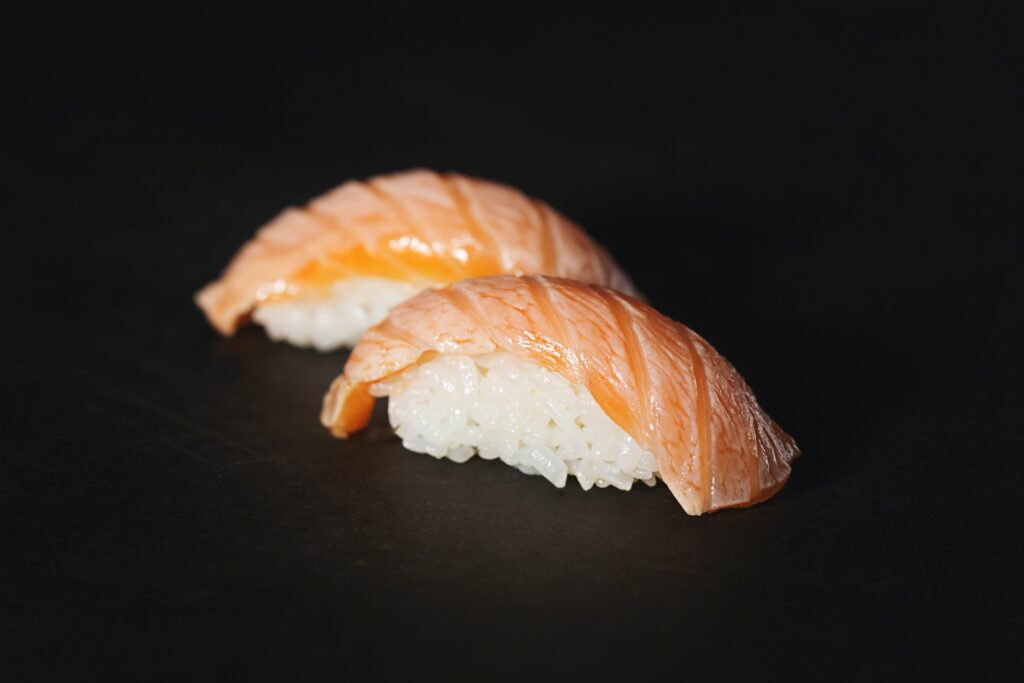 Nigiri-zushi is a Japanese food that was perfected in the Edo period (1603-1868). It is also called Edomae sushi because it uses fish from the sea in front of Edo (now Tokyo Bay) as ingredients.

Originally, sushi was a food made by the lactic acid fermentation of fish with salt and rice, so-called preserved food. To satisfy the hungry of the impatient people of Edo (now Tokyo) in a short time, sushi stalls began to serve sushi with rice(Syari) and ingredients(Neta) together, and this was the beginning of Edomae-Sushi. 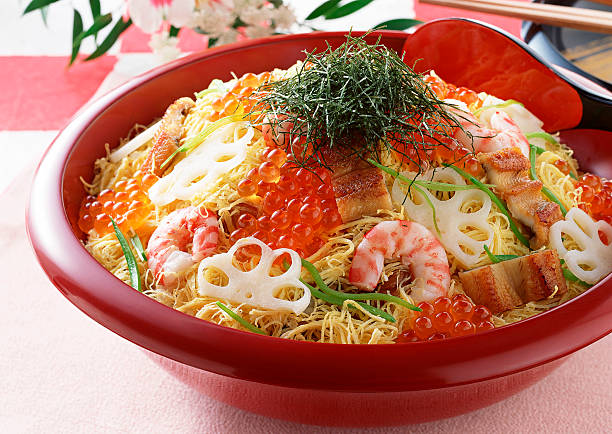 Sushi can be made at home if you don’t care about making it by Nigiri. One of the best examples is Chirashi-Zushi. “Chirashi” comes from that the sushi is made by sprinkling your favorite ingredients on top of the vinegared rice.

It can make a meal look very festive, so it is often used for celebratory meals.

Maki-Zushi are made by placing vinegared rice and other ingredients on a piece of Nori (seaweed) in order, and then rolling it up using a bamboo blind(“Makisu”). It is also called Nori-Maki. They(Sushi rolls) are called Hoso-Maki(thin rolls) or Futo-Maki(thick rolls) depending on their thickness. 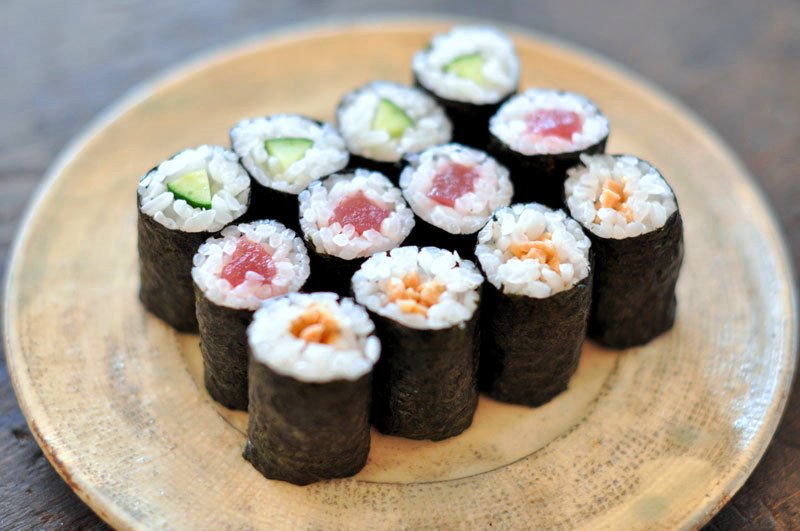 Hoso-Maki is a sushi roll that is rolled up long and thin. It is made the same way, but with only one type of ingredient. The name of them depends on the ingredients used. One wrapped with red tuna is called a Tekka-Maki, and the other wrapped with cucumber is called a Kappa-Maki. 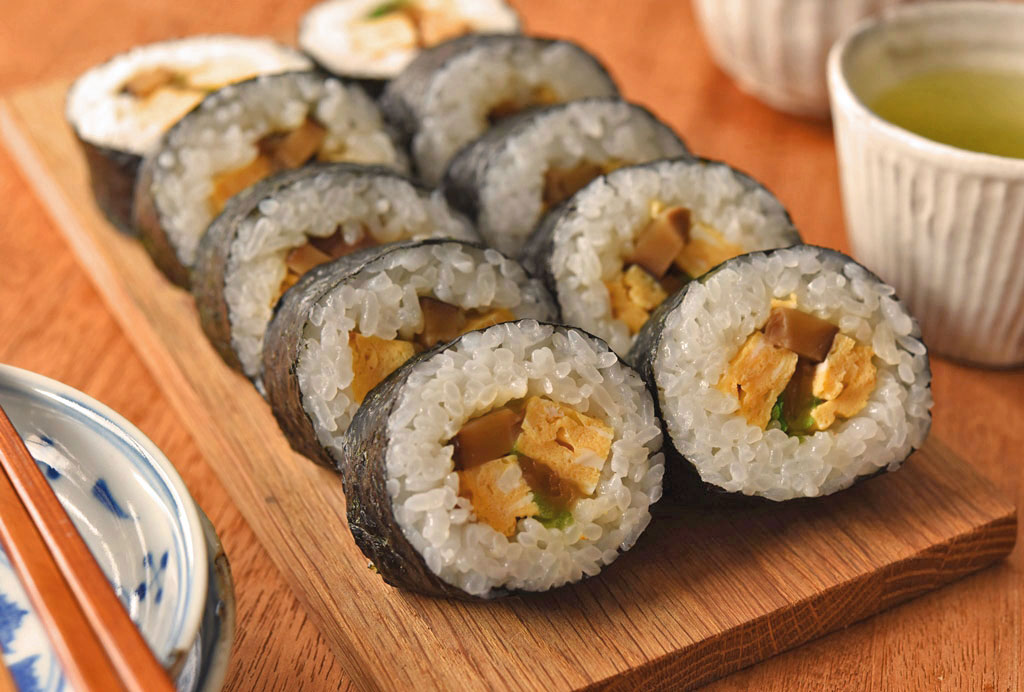 “Futo-Maki” is a roll with many kinds of ingredients. In addition to bolled gourd, cucumber, bolled “Shiitake” mushrooms, and fried egg, grilled eel or sea eel is sometimes used. The ingredients used vary depending on the region, the family, and the season.

In recent years, “Eho-Maki”, a traditional Japanese dish eaten in February, has become famous. On the day of “Setsu-Bun” in February every year, if you can eat a whole roll facing that one specified direction without saying a word, you will receive good luck. 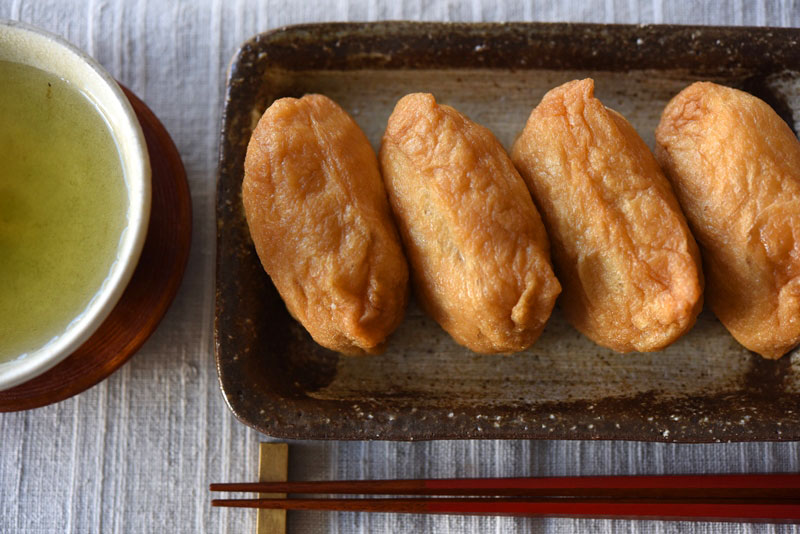 Inari-zushi is a type of sushi made with sweet and spicy fried tofu stuffed with vinegared rice. Inari refers to the god of food, and it has been said that the favorite food of the fox, the messenger of the god, is the fried tofu. This is why the sushi made with fried tofu is called that.

#2: Sushi multiple ways to have fun 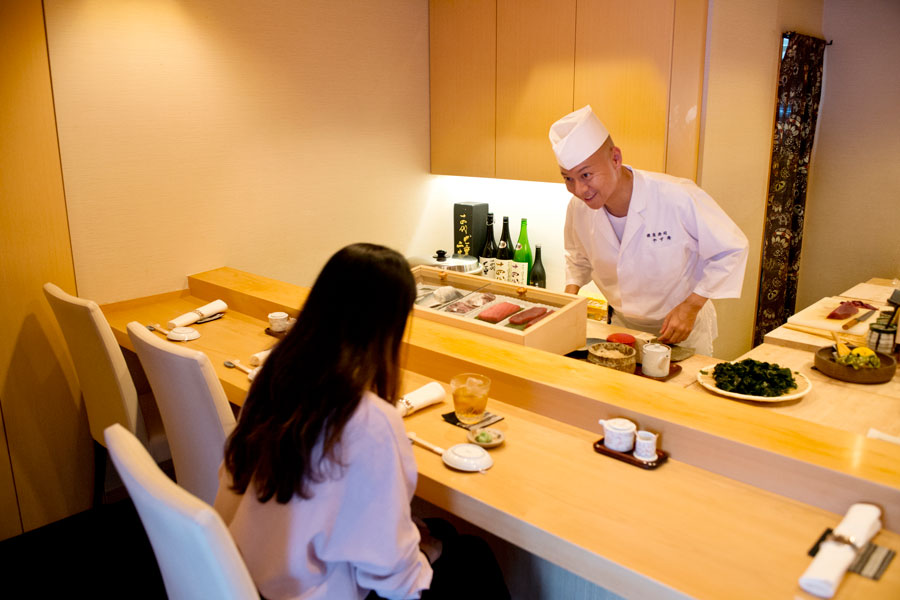 Many of today’s sushi restaurants have a counter style. This is said to have originated from the old yatai (food stalls) that were incorporated directly into the restaurants, but this style has a great deal of appeal.

In general, in a table style restaurant such as French or Chinese, the chef is confined to the kitchen and is disconnected from the guests. No matter how skillfully the chef prepares a delicious dish, there is no opportunity to directly see the guests’ happy faces, nor is there any chance for them to tell the chef what they think of the dish.

The counter style of a sushi restaurant, on the other hand, allows guests and Sushi craftsmen to face each other across the ingredients and create a relationship where they can talk casually. In addition, the guests can choose from the ingredients in front of them and place their own orders. They can also enjoy sake while watching the Sushi craftsmen handle the knife, and talk with the chef about ingredients, cooking methods, and other topics not related to sushi.

Like an Amusement Park!  Sushi goes around on Conveyor Belt 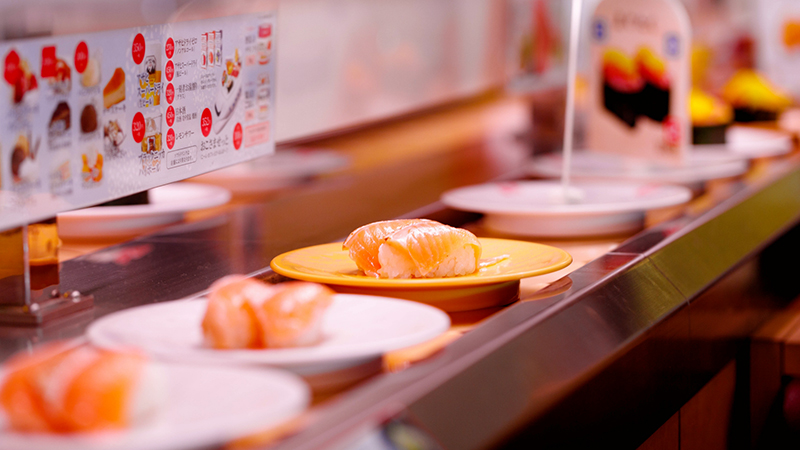 Edomae-Zushi, formed in the Edo period, was originally a fast food. This was because it was served at stalls where venegared rice and ingredients were easily combined for the impatient Edo townspeople. Gradually, as the technology for preserving the ingredients increased, sushi chefs became sushi chefs who made the raw ingredients fresher and the modified ingredients tastier. They were devoted to their dream of owning their own restaurant, and the price of sushi became higher as a result.

For this reason, counter-style nigiri-zushi was considered a luxury by the general public, and people usually enjoyed Maki-Zushi at home. The advent of conveyor-belt sushi changed this concept.

It is said that conveyor-belt sushi was born in Japan in 1958. It was developed by Genroku Sangyo in Osaka, inspired by the conveyor belts used in the production of beer. It was a semi-self-service, inexpensive sushi restaurant where small plates with various types of sushi on them were continuously circulated on a chain conveyor along the seating area, and customers could freely choose their favorite.

At that time, the color of the plate was changed according to the unit price. Today, technology has evolved to the point where the price of sushi is controlled by an IC chip embedded in the plate. Not only the price of the sushi, but also the amount of time it has been on the conveyor can be managed, so that sushi that has been turned too many times can be determined and collected. In addition, customers can now use the touch panel on their seats to select sushi. Once they select the sushi they want to eat, it will automatically come off the conveyor and be delivered to the customer.

In addition, for families with children, conveyor-belt sushi restaurants are adding an element of amusement. Not only sushi, but also fruits, ice cream, and toys are rotated and delivered to the customers. 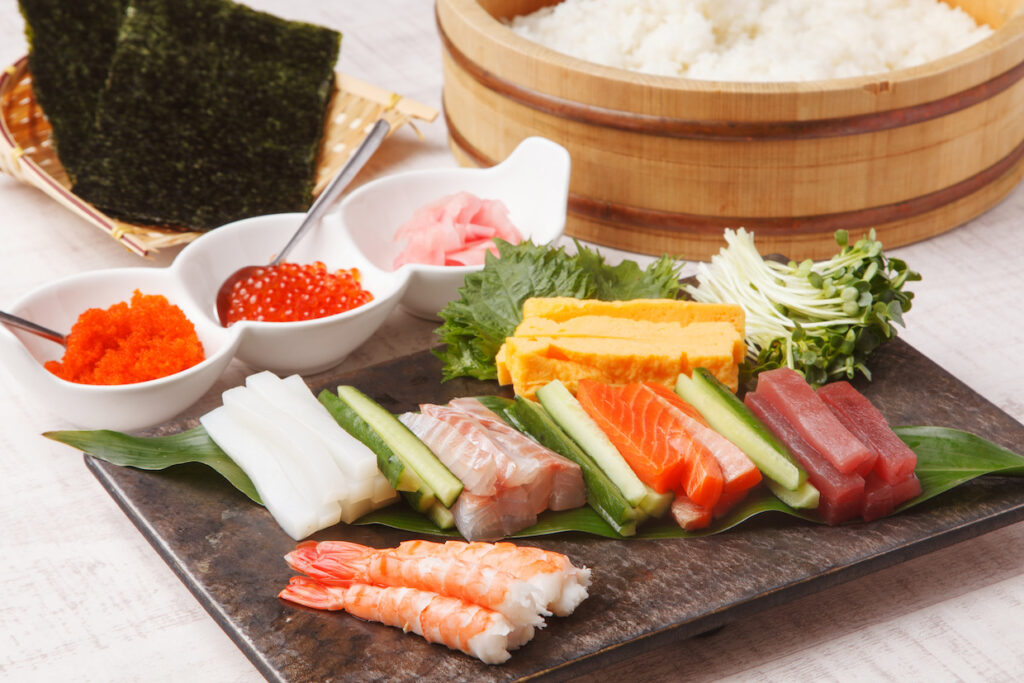 In Japan, sushi parties are often held to celebrate birthdays, Christmas, and other family occasions. This is a style of sushi called “Temaki-Zushi”, where each person rolls up colorful ingredients with nori (seaweed) and vinegared rice as they like.

How to make and roll Temaki-Zushi

The ingredients are not limited to the usual sushi ones such as tuna, egg and shrimp. Some people prepare vegetables sticks, beef, Iberian pork, and so on. The family surrounds the table with a variety of colorful ingredients, and they share the time together as they choose their favorite ingredients and roll them up. A smile naturally appears on their faces.

In the 1980s, when conveyor-belt sushi became popular and sushi could be enjoyed in many homes, a song appeared that took the whole country by surprise. It was song by Shibugaki-Tai, Oh! Sushi(Sushi Kuinei).

This song has a unique rap-style melody and calls out a number of sushi items. With its memorable melody and unique lyrics, the song is still played on TV gourmet shows and as background music in sushi restaurants.

Toshikazu Fukawa, one of the members of Shibugaki-Tai, said the following about that time. This song was inspired by sushi that they ordered at the hotel where they were staying between concert tours, and they combined it with rap that was becoming popular gradually.

This casual song has made the Sushi “Entertainment”.

Shibugaki-Tai, The Pioneer of Japonism 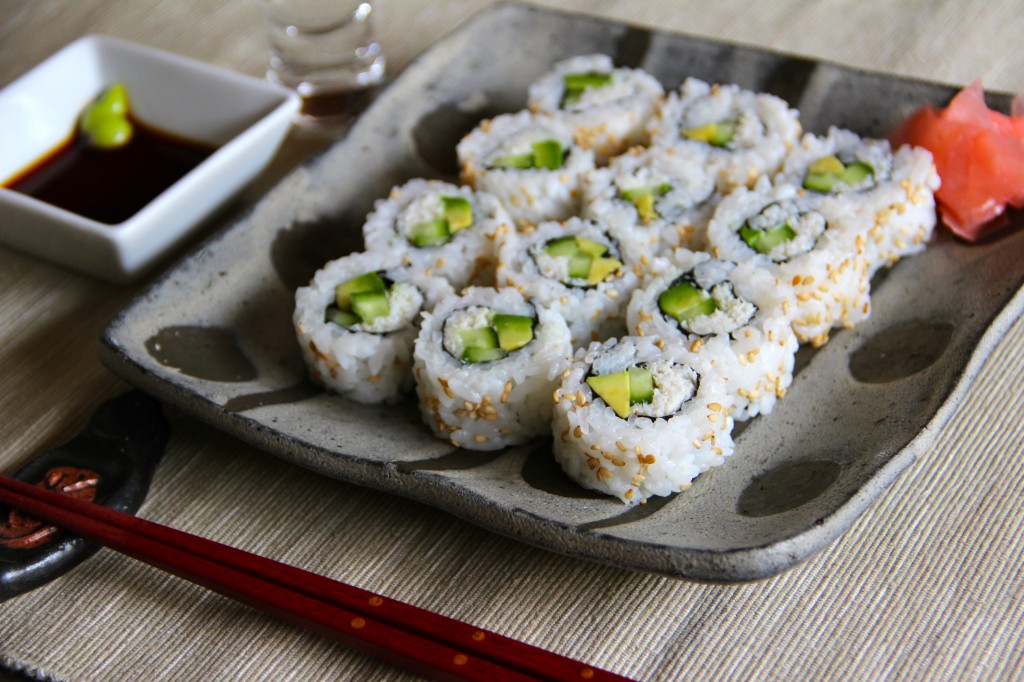 Avocado, instead of Tuna

In the 1960s, Japanese restaurants began to open in the U.S. The Tokyo Kaikan, which opened in Los Angeles in 1965, introduced a sushi bar. Sushi craftsmen came to the U.S., and fresh fish was imported from Japan.

However, for most Americans, fish is something that is canned, baked, steamed, or roasted, never eaten raw. Tuna was the mayonnaise-drizzled tuna fish found in salads and sandwiches. They also did not like the distinctive black color of the seaweed. Therefore, naturally, sushi was rejected by them.

In the 1970s, the sushi chefs at Tokyo Kaikan created the California Roll. Here, the avocado was used instead of tuna, and the nori was wrapped around the inside to keep it from sticking out. Crab and mayonnaise were added, too. In other words, sushi was made to suit the tastes of Americans. As a result, the number of sushi restaurants gradually increased in Los Angeles.

In the 1980s, there was a sushi boom in the United States. This was triggered by a report called “the McGovern Report” released by the US government in 1977. In the report, they presented an index for improving the nation’s diet, stating that meat consumption should be reduced and the intake of vegetables, seaweed, Unrefined grains, and fish should be increased and that the ideal meal would be the traditional Japanese one.

This brought attention to Japanese sushi as a healthy, low-fat, low-calorie food that combines rice and fish with other vegetables.

However, since Americans were not accustomed to raw fish, there was a huge gap between what they imagined fresh and what sushi craftsmen thought was so. Ironically, it was neither the US nor Japan that solved this problem.

In the late 1980s, Japan’s bubble economy collapsed. As a result, Japanese restaurants that had set up in the US were forced to withdraw. It was immigrants from China and Korea that saved this problem.

They bought these restaurants. Together with the Japanese staff who had been working in the U.S., they used local ingredients to create sushi that met the local taste and was preferred by the locals. This action led to the popularization of sushi in the United States.

This phenomenon has spread to other countries and is now a local food product born out of the food culture of the local people. In Canada, for example, there is the “spider roll,” which is a fried crab wrapped with avocado and mayonnaise. In Portugal, the “Hot Philadelphia Roll” is a cream cheese roll wrapped with salmon and deep-fried, then rolled by hand. These are the fusions of sushi.