The Japanese people have a deep relationship with bamboo, even from a global perspective. This is because bamboo has excellent functionality as a living tool and also because it can be used to pursue beauty.

Bamboo has nurtured the culture of Japan

The relationship between the Japanese people and bamboo has a long history, and products made from bamboo have been unearthed from the remains of the Jomon-Period(B.C.13000-B.C.3000). Japanese people have been using bamboo as a useful plant since ancient times. As a light and highly workable material, they had a number of bamboo baskets of various shapes and sizes that they could weave or order from craftsmen to suit their needs, such as back or waist baskets for harvesting crops.

Bamboo was used everywhere in traditional Japanese houses. The clay walls were covered with a core of bamboo. These walls functioned well in the Japanese climate, regulating cold, heat, and humidity. Bamboo, which is robust and has high thermal conductivity, is still used as flooring and other housing materials.

Bamboo is also used not only for daily necessities such as baskets, colanders, and vases, and toys, but also for tea ceremony and flower arrangement tools that represent Japanese culture, musical instruments such as the flute and shakuhachi, and martial arts tools such as bamboo swords and bows, making it a material that is deeply rooted in our lives and culture.

In addition, bamboo has been actively planted in various parts of Japan since ancient times, and well-kept bamboo forests have formed a beautiful landscape.

Flexible, strong, and versatile, bamboo is truly a blessing from nature and an indispensable plant for the transmission of Japanese culture and people’s lives. 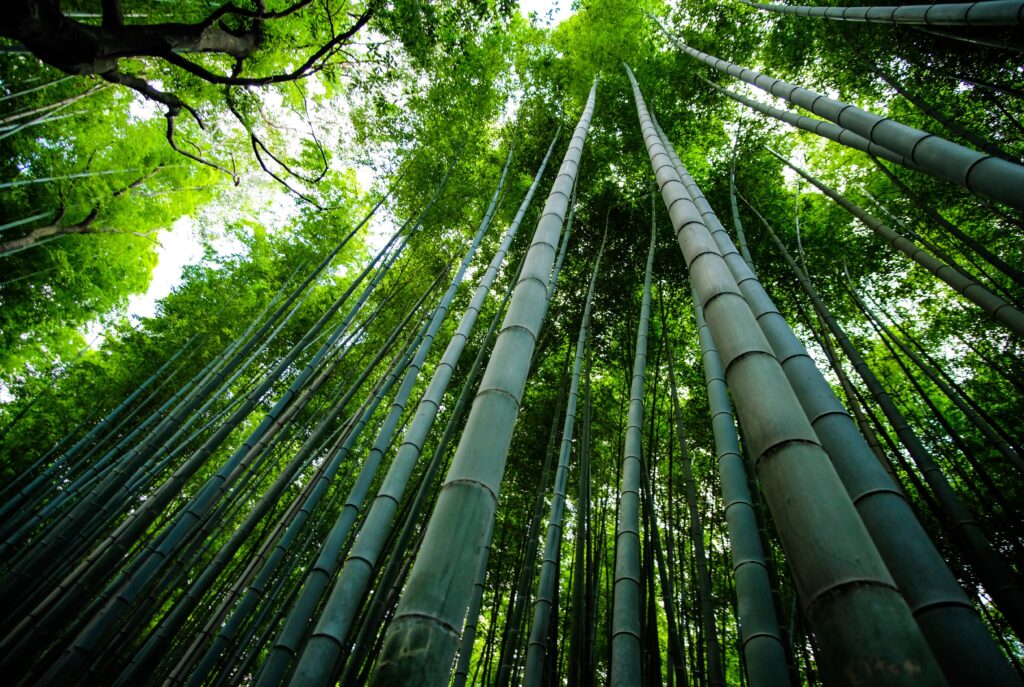 Although there are many theories on how to classify and count the number of species, it is generally believed that there are about 600 species of bamboo in Japan. If we look at the world, there are about 1,200 species, which is astonishing in its diversity.

The part that is the trunk of the tree is called the bamboo culm in bamboos. The thicker the culm, the longer the life span of the bamboo, which is generally about 20 years. Bamboo grows upward, but the culms do not get thicker every year as trees do.

Bamboo grows faster than trees, and although it depends on the type and use, bamboo that has been growing for at least three years should be used for bamboo lumber. The best time to cut down bamboo is in late autumn or early winter, when it is generally not growing.

In addition, just like the bamboo culm that grows rapidly, the underground stem also shows vigorous growth. The underground stems in the third or fourth year produce the most bamboo shoots and gradually decrease after the fifth year. After that, a good harvest (front year) and a bad harvest (back year) are repeated almost every other year, resulting in a difference in the amount of bamboo shoots harvested.

The Power of Bamboo

The bamboo itself grows vigorously, but the inside of the bamboo culm is hollow. Bamboo is truly a mysterious plant. It is said that the ancient people had a kind of natural religious belief in the mysterious hollow shape of bamboo. This mystique must have given birth to the Tale of the Bamboo.

The Tale of the Bamboo Cutter(Japanese:Taketori-Monogatari), which is said to be the oldest story in Japan, is the tale of Princess Kaguya, who was found in the shining bamboo by a bamboo-cutter and raised by him and his wife. It is so famous that every Japanese knows it.

In addition, Thomas Edison (1847-1931), the American king of invention, used bamboo from Yawata-City in Kyoto Prefecture as a material for his incandescent light bulb. Bamboo has thin and strong fibers, and seems to be the best material for making long-lasting filaments.

– Fragmentation
Bamboo has a tendency to split lengthwise. It is used to make baskets, colanders, bamboo screens, fans, and tea whisks. 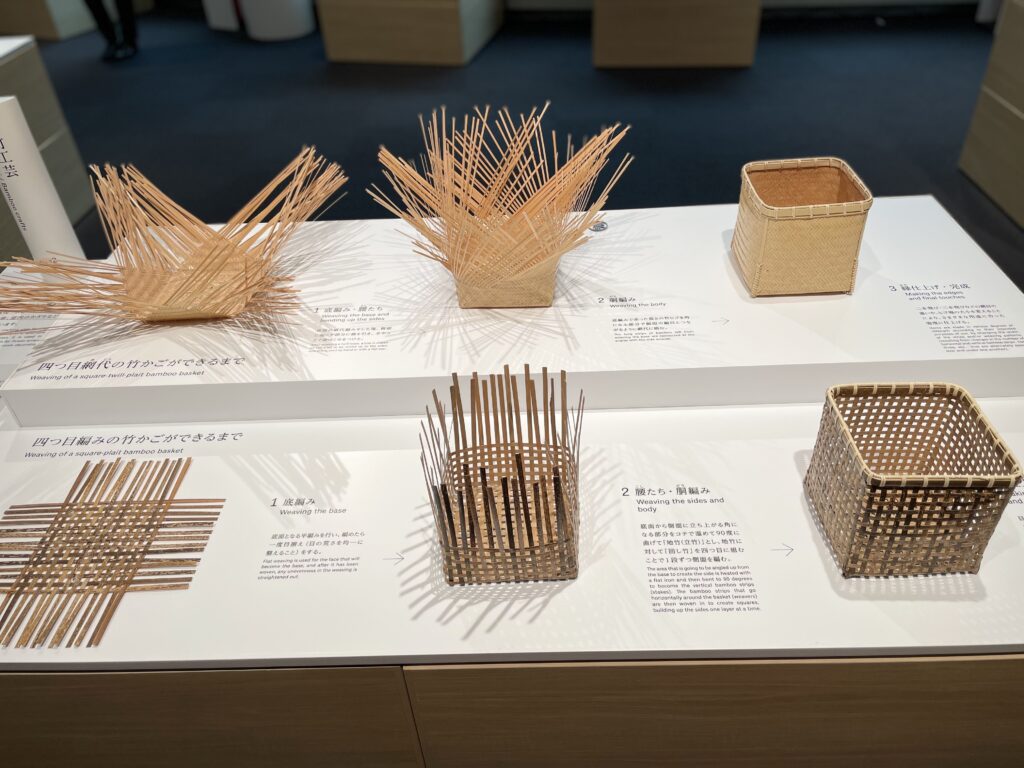 – Elasticity
Elasticity and flexibility. It is suitable for bows and fishing rods.

– Light and strong
High durability in daily life and good touch. It is used for tableware such as chopsticks and tea utensils such as tea scoops.

– Hollow
Bamboo culms are hollow, and are often used to make flutes such as the shakuhachi (bamboo flute) and sho (traditional Japanese court music), as well as flowerwares. 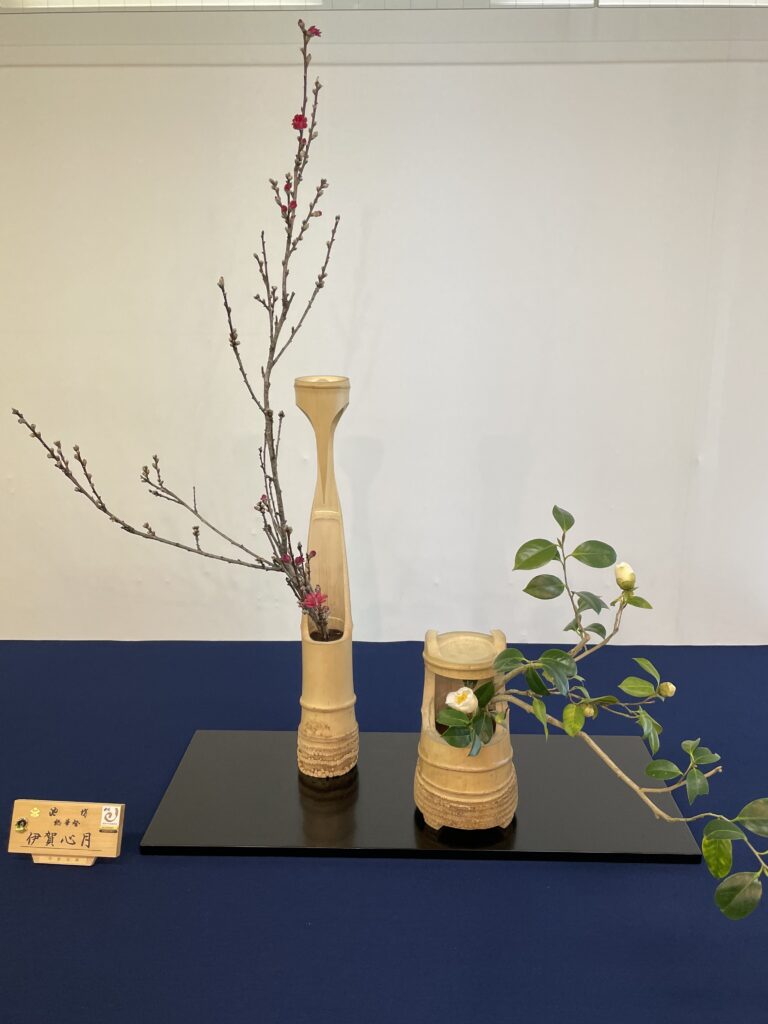 – Antibacterial and deodorizing
Bamboo has excellent antibacterial and freshness-preserving properties not only in its culms, but also in its bark and leaves. Since ancient times, Japanese people have been using them to preserve food. Bamboo bark is used to wrap onigiri (rice balls) and meat, and bamboo leaves are used to wrap foods, such as sasa-zushi (bamboo sushi), sasa-kamaboko (bamboo fish cake), and Japanese sweets.

With the rapid growth of the economy, humans have been able to mass produce man-made products such as plastic and aluminum. As a result, bamboo products, which take a long time to make, were shunned, and plastic products in particular came to dominate the tools of daily life. In the meantime, the number of craftsmen who could make bamboo products continued to decrease.

In recent years, due to their scarcity and artistry, bamboo products and bamboo craftsmanship have found their value as art, and it is heard that more and more people are buying them for interior decoration.

However, we feel that bamboo is valuable only when it is used and lived with by people. On this site, we would like to share with you bamboo products that you can feel the beauty of as you use them.